Nine Inch Nails has left Interscope after many conflictions, especially over the past year with the artist and the label. Here is an announcement about the release:

Hello everyone. I’ve waited a LONG time to be able to make the following announcement: as of right now Nine Inch Nails is atotally free agent, free of any recording contract with any label. I have been under recording contracts for 18 years and have watched the business radically mutate from one thing to something inherently very different and it gives me great pleasure to be able to finally have a direct relationship with the audience as I see fit and appropriate. Look for some announcements in the near future regarding 2008. Exciting times, indeed.

Trent Reznor has made it very clear his thoughts and feelings about the major record companies and he isn’t the only taking this stand. Recently in an editorial Bob Lefsetz had very similar feelings.

Lefsetz goes into detail on why to not sign with a major recording label. With such reasons as “They Tell You What To Do”, “They Don’t Pay”, “They Just Care SOMETHING Hits”, and “They Specialize In Saying No”. You can read his complete editorial right here.

An interview with Trent Reznor and his thoughts on record labels

Artists Updates, Nine Inch Nails
Comments Off on An interview with Trent Reznor and his thoughts on record labels

Trent Reznor was recently interviewed by an Australian newspaper about his blog post. You can read the complete interview here.

In a recent post on Trent Reznor’s blog (lead singer of Nine Inch Nails) he has stressed his opinion on record labels including his own. Read more in his post below:

As the climate grows more and more desperate for record labels, their answer to their mostly self-inflicted wounds seems to be to screw the consumer over even more. A couple of examples that quickly come to mind:

* The ABSURD retail pricing of Year Zero in Australia. Shame on you, UMG. Year Zero is selling for $34.99 Australian dollars ($29.10 US). No wonder people steal music. Avril Lavigne’s record in the same store was $21.99 ($18.21 US).
By the way, when I asked a label rep about this his response was: “It’s because we know you have a real core audience that will pay whatever it costs when you put something out – you know, true fans. It’s the pop stuff we have to discount to get people to buy.”
So… I guess as a reward for being a “true fan” you get ripped off.

* The dreaded EURO Maxi-single. Nothing but a consumer rip-off that I’ve been talked into my whole career. No more.

The point is, I am trying my best to make sure the music and items NIN puts in the marketplace have value, substance and are worth you considering purchasing. I am not allowing Capital G to be repackaged into several configurations that result in you getting ripped off.

We are planning a full-length remix collection of substance that will be announced soon. 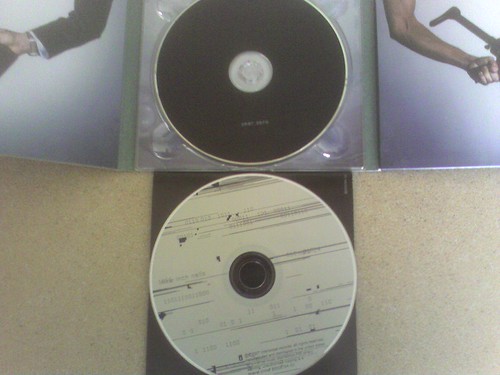 NIN’s Year Zero is playable in full on their official website.

Launch Radio Networks reports: The Recording Industry Association of America (RIAA), which has become notorious for suing anyone from high school students to retirees for downloading music from the web, has gone after web sites such as Idolator that have posted leaked songs from the upcoming NINE INCH NAILS album, “Year Zero”. The problem, however, is that the tracks were leaked intentionally. Several songs from the album were left on computer hard drives at venues on the band’s current European tour, with fans finding and posting them on the web for others to download and swap. According to Billboard.com, the RIAA sent cease-and-desist emails to web sites that posted the tracks, leading one industry source to say, “These f***ing idiots are going after a campaign that the label signed off on.”

While a number of songs have been intentionally released, the entire NINE INCH NAILS album has not leaked online yet. The CD arrives on April 17.

In addition to the leaked tracks, the marketing campaign for “Year Zero” has featured cryptic messages on T-shirts and a maze of linked web sites that expand upon the album’s storyline of a future U.S. on the brink of apocalypse.

The same source told Billboard that NINE INCH NAILS frontman Trent Reznor views the campaign as a “new entertainment form.” The source added that the campaign will continue for the next 18 months.

“Year Zero” is reportedly the first of two concept albums, the second of which Reznor hopes to finish next year.

NINE INCH NAILS finishes its European tour on April 10 in Finland and has just announced another round of shows on that continent beginning in August. A trip to Australia and Japan is planned for May. North American dates have not been announced yet.